I heard it again just last Friday in a call with a large southeastern utility where a capital improvement budget was cut from a $100 million to $14 million. The justification? Council did not approve the rate increase! Over and over again, we see frustrations between elected boards who just don’t believe that major water utilities are operating as efficiently as they can. What’s the problem? Quite honestly, the problem is the utility staff have done a poor job of tracking and showing how they have implemented efficiency measures and are improving the utilities operations over time. One way to push back apathy from elected boards is to show the data in terms that are easy to understand and believe: graphical bench marking to show what the utility has done to reduce Non-Revenue Water (water delivered into the system that is lost and does not generate revenue for the utility). 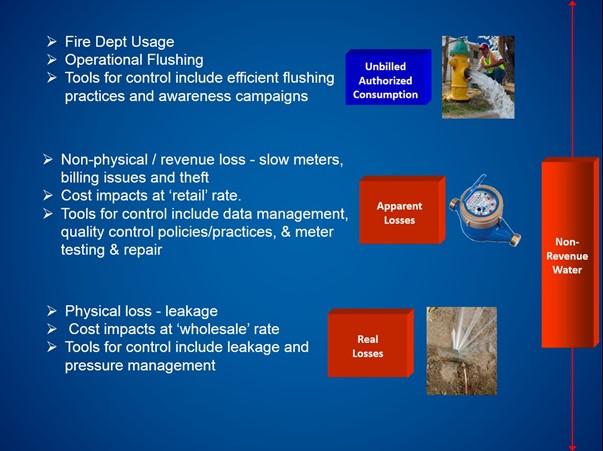 Unfortunately, utilities continue to use abandoned – inherited – poor business practices of Unaccounted for Water (UFW) and have lulled themselves into thinking they can’t have their system perform any better than 10% UFW. The fact remains that UFW percentage does not measure performance at all! With two simple examples, it can be shown how UFW abandonment by AWWA 13 years ago was the right thing to do.

If you want to learn more about what the best run utilities with proactive leadership are doing to embrace efficiency practices and give your boards something to vote for, instead of something to vote against, you might want to check out AWWA’s Non-Revenue Water business practices. ​