Posted on November 1, 2018 by Sharon Niemann

The American Biogas Council recognized the Optima KV Swine Manure-Derived Renewable Natural Gas Project as the Agricultural Project of the Year at its Industry Awards held on October 16th, 2018. The Awards program was part of the BioCycle REFOR (Renewable Energy from Organics Recycling) Conference, hosted in Raleigh.  Optima KV was commissioned in March of 2018, the very first project in the state to deliver natural gas into the pipeline system from indigenous resources – and it just so happens that these indigenous resources are renewable (pig manure).

The project, located in Kenansville, NC, biologically converts the pig manure and wastes into methane-rich biogas.  The manure stems from 5 contiguous farms with a total capacity of about 60,000 pigs.  An anaerobic digester constructed on each farm encourages naturally-occurring bacteria to consume the manure and respire biogas, which is captured, then transported via low-pressure pipe to a centralized gas upgrading site (GUS), or refinery. At the GUS, the biogas is purified to renewable natural gas (RNG) and pipeline standards. Duke Energy has agreed to purchase the RNG for use to fuel an existing power plant to make electricity.  The electricity generated from the RNG helps Duke Energy comply with its obligations under the State’s renewable energy requirements.

When asked what he would like people to know about this project, Gus Simmons, Cavanaugh’s Director of Bioenergy who is partner in both the firm and the project said this:

“This is the first natural gas ever produced and sold into the pipeline system in North Carolina. The remarkable thing is that this natural gas is renewable, and happens to come from pig farms in our state.  North Carolina has abundant organic waste resources, and systems like this improve the sustainability of both the agricultural and energy industries in our State.”

The REFOR conference is touted as the only national conference for the Biogas Industry. Given the great deal of focus the past few years on biogas opportunities in North Carolina, the timing of holding this conference in Raleigh could not have been better. 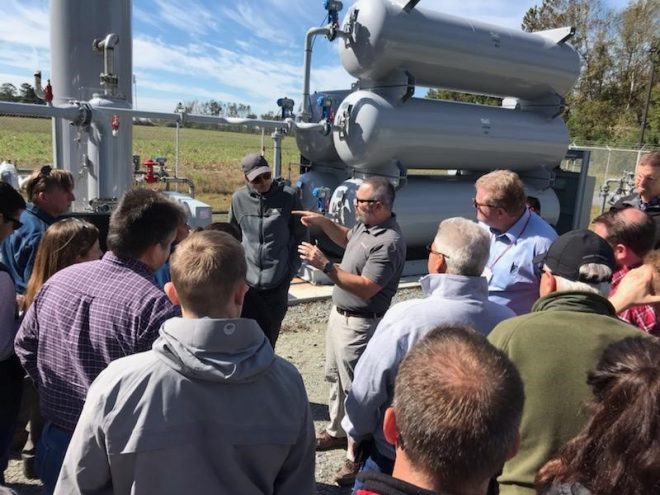 During the BioCycle REFOR project tour, Gus Simmons explained to the 60 visitors from around the globe how the centralized gas upgrading system at Optima KV operates. 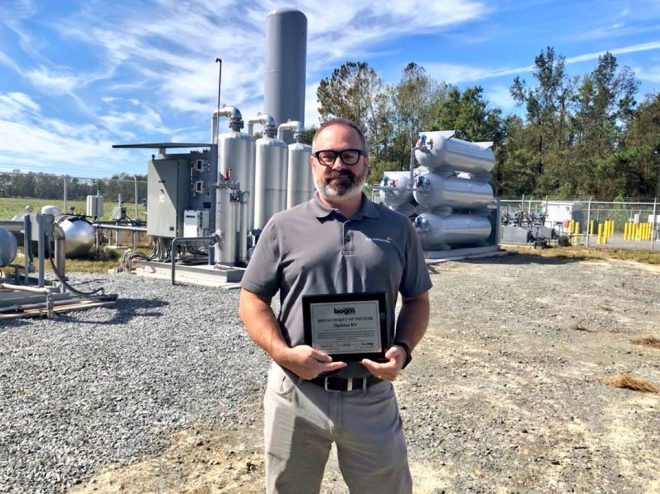 The American Biogas Council shared this photo of Gus in front of the Gas Upgrading System (GUS) at Optima KV, that’s double the Gus!  The project was awarded 2018 Agricultural Project of the Year at the BioCycle REFOR Conference.