Optima-KV is the first renewable natural gas injection project in North Carolina, aggregating the biogas produced from the anaerobic digestion of swine waste from 5 farms via pipeline.  The resulting RNG will be purchased by Duke Energy to produce electricity for at least 15 years.

In May 2016, Optima KV obtained an agreement with Duke Energy who will use the gas generated at 5 contiguous swine farms (directed biogas) at existing combined cycle plants, which will help Duke Energy satisfy the agricultural RPS requirement in the state.

Optima-KV is the evolution of Cavanaugh’s Stewardship through Innovation in the bioenergy sector, and is the first project in North Carolina to inject gas into the natural gas pipeline.  Predicated by a number of studies and investigation of the derivation of renewable energy form swine waste, and the design/construction/operation of the Loyd Ray Farms project, Optima-KV aggregates the biogas produced by five contiguous swine farms in Kenansville, North Carolina in a manner that improves the economics of such waste-to-energy endeavors.  Manures and wastes generated by the farms’ combined 60,000 animals is directed into a newly constructed anaerobic digester serving each farm.  Along with necessary infrastructure improvements such as pumping stations and pipelines to transport the manure to the digesters, a gravity pipeline to the existing lagoon was also installed as a backup, ensuring continued farm operations at all times, should any portion of the new system experience a disruption.

A low-power compressor at each farm pulls the biogas from beneath the synthetic cover, filters it for particulates and removes moisture through a simple condenser.  After this pre-conditioning step, the directed biogas, or RNG, is pumped via low pressure, small diameter pipes to centralized location on a participating farm, where it undergoes pressurization, cleaning and purification to pipeline quality standards, which is at least 96% methane, and is pressurized to 100 psi for injection into the natural gas pipeline. Thus, Bioenergy is being produced while the farmers continue with their normal operations.

Manure and wastes from the animal barns are flushed into the digesters that range in size from 1.7 to 3 million gallons.  Through the process of anaerobic digestion, bacteria consume the manure and organic waste, respiring energy-rich biogas.  The biogas is captured from the digester at each farm, conditioned to remove particulates and moisture, and piped via low pressure, small diameter pipes to a centralized refinery or gas upgrading system.  The gas upgrading system, or “GUS” for short, removes unwanted constituents from the biogas, yielding a natural gas stream that is nearly 100% pure methane.  Conventional geologically-derived pipeline natural gas is typically only about 95% methane.  Rather than each farm having its own purification center, aggregating the biogas rather than the manure takes advantage of cost efficiencies and is more supportive of the farms’ biosecurity requirements. 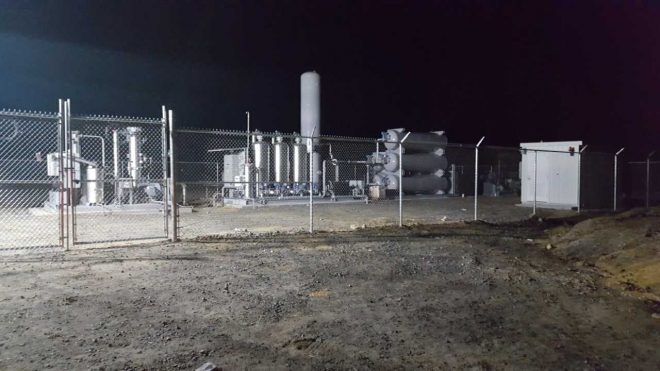 Pictured above, the centralized gas upgrading system uses a series of filters to remove unwanted biogas constituents, such as moisture and carbon dioxide.  Swine manure digester-derived biogas is a very simple gas, comprised typically of approximately 65% methane, 34% carbon dioxide, and about 1% inert materials such as sulfur and nitrogen.

The project is expected to yield about 80,000 MMBTU’s (dekatherms) per year of renewable natural gas.  Duke Energy has contracted with Optima-KV to acquire the renewable natural gas (RNG) and use it to partially fuel two combined-cycle natural gas power plants, in Wayne and New Hanover Counties, which will help Duke Energy meet its requirements for the production of renewable energy under North Carolina’s renewable energy and energy efficiency portfolio standard.  The RNG from the Optima-KV project will generate approximately 11,100 megawatt-hours of electricity annually, enough to power about 880 homes, which is a little over twice the number of homes in Kenansville, N.C.

The Optima KV Project has a 15-year RNG off-take agreement with Duke Energy, and is expected to reach the pipeline and be completely operational in February 2018.  The NC Biotechnology Center was a tremendous support in obtaining the Qualified Energy Conservation Bond (QECB) allocations for this project.

Read more about this project, in the NC Pork Report, Winter edition, whose cover picture is featured above, and see additional pictures here.

Kraig Westerbeek, Senior Director of Smithfield Renewables and Production Division Environmental Affairs is hopeful the project can be replicated on more farms in North Carolina. In the NC Pork Report article highlighted, Kraig expressed, “Biogas capture and conversion to renewable natural gas is very much aligned with our recently announced carbon reduction initiative, and consistent with other renewable energy projects that are located on Smithfield farms across North America, this approach takes advantage of the developing market for renewable natural gas, while reducing issues related to creating electricity at the farm level.”

“This is a significant breakthrough in technology” commented Cavanaugh’s Director of Bioenergy, Gus Simmons.  “Our on-farm digesters will integrate with and support the farmers’ existing operations. By centralizing the gas processing, we can take advantage of cost efficiencies and provide carbon-neutral fuel for Duke Energy’s existing power plants, which supports their efforts to comply with the North Carolina REPS.”  North Carolina is one of many states in the U.S. with a Renewable Energy Portfolio Standard, but the only one with a specific requirement for a portion of the renewable energy requirement dedicated to the derivation of energy from swine farming and poultry farming wastes.  An overview of the North Carolina REPS may be accessed here.  “It’s a great benefit for the environment and for the economy, and it’s just the beginning… the potential for these projects in our state is enormous.”  The use of agricultural wastes for renewable energy lessens our dependence on fossil fuels, and encourages improved sustainability of farming operations and the products they produce. 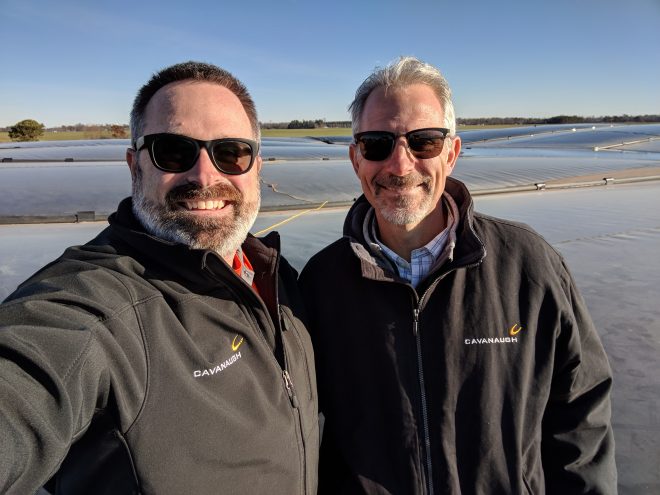 Gus Simmons and Steve Cavanaugh are all smiles as they stand atop a reservoir of freshly generated biogas that will soon become Renewable Natural Gas, injected into the existing pipeline grid, and delivered to Duke Energy to fuel the creation of renewable electricity.

This project would not have been possible without the following:

The following video is of product gas (RNG) combusted in the flare. It is our intention that all RNG be routed to the pipeline for beneficial use; this video was taken once the system was commissioned, prior to the natural gas pipeline interconnection being installed:

For additional information on the Optima-KV project, we suggest you read the following media publications: