Posted on December 3, 2018 by Sharon Niemann

“RNG is an innovative and proven way to dramatically reduce greenhouse gas emissions from the agriculture industry by converting it into clean renewable energy.” 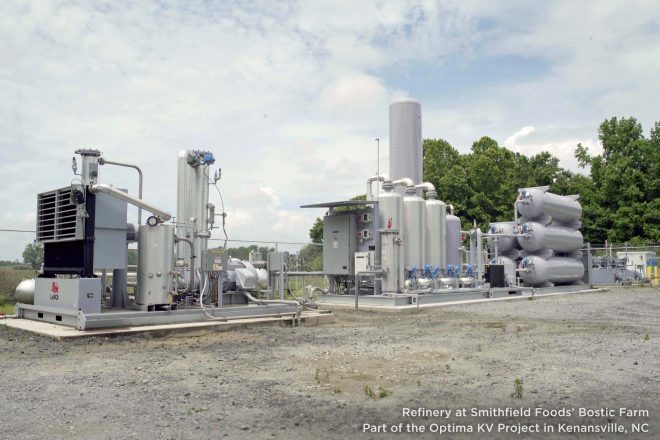 Two global industry leaders commit to significant investment to improved sustainability as they announce a first-of-its-kind joint venture between a major U.S. protein market corporation and a utility, for the purpose of turning hog manure into Renewable Natural Gas .  The Joint Venture between Dominion Energy and Smithfield Foods, called Align Renewables, committed over $250 million dollars of investment in these projects over the next 10 years.  One of the chief goals of this JV is the reduction of the environmental impact of methane emissions from modern swine farming, while generating reliable Renewable Natural Gas.

A video news report of the announcement is provided below:

The US is the world’s largest pork exporting country, and now through anaerobic digestion, where the solids in the waste are converted into biogas, American farmers will be able to create reliable energy from a renewable source.

The environmental benefits are huge:

Cavanaugh partner Optima Bioenergy commissioned its pilot project of this concept in Duplin County, NC in March of 2018.  The Optima KV project (gas upgrading system pictured above) pioneered the way for expansion, and set the stage for the first renewable gas interconnection, helping utilities meet the NC Renewable Portfolio Standard, which stands alone as the only agricultural REPS in the United States.  After purification, the resulting biogas derived from the hog manure is nearly 100% methane and ready for pipeline injection.  Smithfield stated in its press release that its plans for swine manure projects build on the success of the Optima KV project. Optima Bioenergy’s second project Optima TH, began construciton in December 2018.

The joint venture projects are being developed in the states of North Carolina, Virginia, and Utah; and will offer additional revenue streams and optimal waste management strategies and techniques to Smithfield contract farmers in those states.