Loyd Ray Farms in Yadkinville, North Carolina is home to approximately 8,600 finishing pigs, and the only Innovative Swine Waste System in North Carolina that generates Renewable Energy Credits for an electric utility. In addition to generating enough electricity to power an innovative environmental treatment system, the project creates enough surplus electricity to power about half of the farm, and reduces the farm’s greenhouse gas emissions by the equivalent of removing 900 automobiles from the road annually. 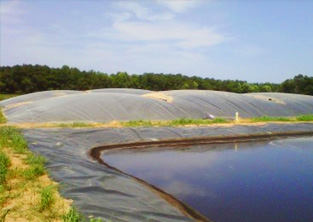 Waste generated by the animals is flushed into an anaerobic digester, where bacteria consume the waste and respire energy-rich biogas. The biogas fuels a microturbine that generates electricity, and excess gas flared. After digestion, the liquid waste is further treated to achieve the Environmental Performance Standards set forth by North Carolina for Innovative Swine Waste Treatment Systems.

The project not only creates a cost-effective solution that converts swine waste into renewable energy, it also achieves a superior level of waste treatment, and a reduction in the carbon footprint created by the conventional waste management system. It is getting worldwide attention for its simplicity and effectiveness in design.